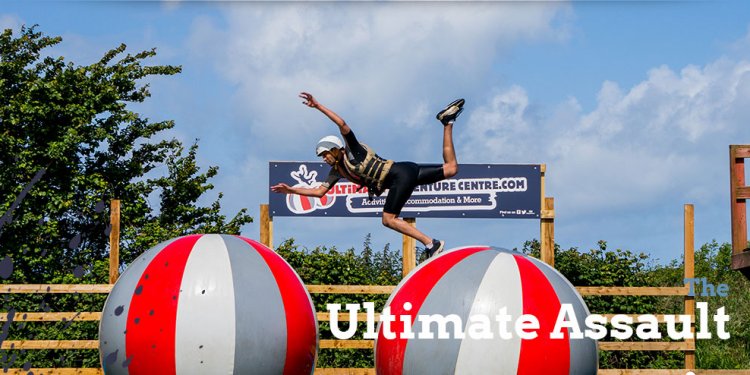 When I was a child, an almost unthinkable amount of time ago, I used to be taken – not exactly under protest, but without much enthusiasm – to stay in holiday camps in the West Country. These were usually disguised as “Country Clubs” or “Chalet Hotels” but the basic principle was the same – spartan accommodation, terrible food, group activities and bingo or the hokey cokey in the evenings.

I can't quite remember if I stayed at Pontins Barton Hall just outside Torquay, but I certainly would have experienced something similar when, aged 10, I went to the Torbay Chalet Hotel in Paignton which offered a Hammond Organ, nightly cabaret and “hot and cold showers”. I have avoided such establishments assiduously ever since.

Nowadays, Pontins Barton Hall has been converted into one of the centres for PGL, a sort of down-market Center Parcs, specialising in “activity” and “adventure holidays”. It's located on a property which is partly distressed baronial (Barton Hall was built in the 1830s by the Lord of the Manor) and part municipal, at least in appearance. The ranks of chalets could easily pass for a low-rise housing estate in south-east London or a Neapolitan slum (there is laundry hanging from many of the communal concrete balconies) if they weren't fringed by the incongruous Devon countryside. PGL is where I used to send my two elder children for supervised holidays when they were pre-teen (it was informally known as “Parents Get Lost”). They always enjoyed themselves, and I was glad to leave them to it.

However, having learned that PGL now also offers “family adventures” in which you join your children for a four- or seven-night break, I decided to put my historic aversion to one side and spend Monday to Friday mountain biking, zip-wiring, raft building, abseiling and much besides. My two younger children, Esme and Lydia, aged eight and 13 respectively, joined me along with my wife Rachael to see what one version of the modern equivalent of a holiday camp looked like. I was not savouring the prospect – in recent years, I have largely confined myself to slightly more upmarket establishments.

Besides, you will be interested to read about gosport locksmith.

My initial impressions of Barton Hall did little to dilute my prejudice. Our room was beyond basic, with two simple beds and a shower/bath (Lydia and Esme were next door). No mini bar, of course – only a kettle with a few teabags and sachets of instant coffee.

Everyone on the premises was part of a family (with the exception of a 50-strong group of vociferous German teenagers) so there was a far higher percentage of children than I am used to, making a great deal more noise than I welcome. The air was punctuated by the sound of footballs being kicked. There were quite a lot of people whose BMIs left more than a little to be desired – and more than a few of them, to my consternation, were among the blue-shirted PGL activities staff (the contemporary equivalent, I suppose, of the Bluecoats who used to look after my 10-year-old self).

We arrived on a Monday night, so the first stop was the evening meal at the dining room, or “canteen” as it might more accurately be termed. A quick check of the week's menu suggested that I was unlikely to be eating much in the way of quinoa, kale salad or guinea fowl. Chips featured very prominently along with chicken nuggets, sausages, gammon steak, turkey burgers and “white fish” with parsley sauce, a delicacy I thought had long been consigned to the annals of culinary history. We sat around the table looking glum (Lydia and Esme are not great ones for sporting activities either). “I'm having a lot of trouble remaining optimistic for everyone, ” Rachael said, her bright smile shadowed with anxiety.

However, our apprehension was entirely misplaced. We had a rich and rewarding week, and I learned to put my bourgeois London prejudices in the landfill where they very much belonged. Yes, there was bingo in the evening, and there were those little coloured lights that danced around the bars, and I couldn't get a flat white with a cantucci, but we got something much more precious – a sense of bonding and family purpose that we had never experienced before on a holiday.

The first thing that is worth pointing out about PGL is that you are put in groups of about a dozen (we were with a couple of charming families from Birmingham and Essex). So, during the four daily 90-minute sessions your actual time of physically participating in an activity can be quite brief. For instance, on our first outing, the trapeze – which involved climbing a 30ft pole and jumping out into thin air and on to, yes, a trapeze – each of us spent only a few minutes actually climbing and jumping. For the rest of the time we were watching other people. This was true of most activities, such as the zip-wire or abseiling.

However, it is not mere spectating. It is more theatre. Trying to urge the frightened child up the pole and seeing them conquer their fears (or not) is a large part of the experience – rather like therapy-as-entertainment. When they actually do overcome their terrors (and jumping from heights is quite a big ask for a seven-year-old – the youngest in our group) there is a big rush from the rest of the spectators, even if it may have taken 10 or 15 minutes of pleading and imprecation to convince them.

This was true of Esme on the zip wire, who stood there on the edge of a platform into yawning space for at least 10 minutes before we gave the instructor permission simply to shove her off. After the initial shock had worn off, and the sense, presumably, of bitter betrayal, she came back swiftly for a second launch.

To say such holidays are “character building” may or may not be true, but they are certainly “family building”. You eat together, play together, strive together, get wet and fearful together. On our mountain biking session, Lydia was so soaked and muddy she was barely recognisable as human, resembling more some stunted Morlock. Likewise, looking at her face when she prepared to abseil backwards off a wall the size of a house, to see the terror in her eyes was discomfiting – but the joy of her achievement in launching herself more than compensated.